To share your memory on the wall of Helen Morrison, sign in using one of the following options:

Print
Helen Voneda Morrison age 79, of Jackson, Missouri; passed away on Monday, March 9, 2020 at her residence.

She was born on June 17, 1940 in Bellville, Illinois; daughter of Oliver and Kathleen Oriley Friess. She and Lynn Morrison were un... Read More
Helen Voneda Morrison age 79, of Jackson, Missouri; passed away on Monday, March 9, 2020 at her residence.

She was born on June 17, 1940 in Bellville, Illinois; daughter of Oliver and Kathleen Oriley Friess. She and Lynn Morrison were united in marriage on August 30, 1958.

Helen worked for H & R Block as a tax preparer and a member of the Immaculate Conception Church in Jackson, MO.

In Lieu of flowers memorial donations are requested to the St. Jude’s Hospital.

Memorial services will be Saturday, March 14, 2020 at 11:00 AM at the Ford and Sons Funeral Home in Jackson with Father John Harth officiating. Liley Funeral Home in Marble Hill is in charge of services.

A meal will follow the service at the Immaculate Conception Church in Jackson, MO.
Read Less

To send flowers to the family or plant a tree in memory of Helen Voneda Morrison, please visit our Heartfelt Sympathies Store.

We encourage you to share your most beloved memories of Helen here, so that the family and other loved ones can always see it. You can upload cherished photographs, or share your favorite stories, and can even comment on those shared by others. 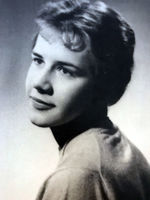